It had been 30 years since he’d last seen the place, but my husband Nico insisted on taking Baby and I on a family adventure to see Banana Bend on the San Jacinto River.  I was a bit skeptical; picturing a run down, or shut down, remnant of what once had been a fun party place on the bend of the river.  Boy…!  Was I ever surprised!  –In a very good way.

I had already found myself quite charmed by the tiny ferry boat that had carried our crew of three across the ship channel, quite a ways inland and up the waterway from Galveston Island.  Able to carry not even 20 cars at a time, The Lynchburg Ferry was like stepping back in time, in a way.  Unlike the Bolivar Ferry — which we’ve ridden often — The Lynchburg Ferry looked a bit unstable at times, and traveled much slower than its much larger neighboring ferry (Bolivar Ferry).

So I snapped one-after-another photos of our crossing, and we were on our way…yet-again, down the road, searching for that place Nico had left in his past…until this day.  Bumping down the two lane road in our old VW Camper Bus, we stayed on the look-out for a sign…any sign, to let us know we’re heading in the right direction.  Then…we spotted it!  — Banana Bend…Just Ahead.  The sign said, in a nutshell; though Nico was going too fast for me to read the small print.

A few miles down the road, we came to an overpass that Nico didn’t remember ever seeing decades ago when he last visited Banana Bend.  So…we turned around and went back to the sign he’d sped past in such a hurry at last pass.  Sure enough, in small print, it had listed the street where we should have turned before.

Making our turn onto a much smaller road — a Farm to Market road — we continued on our adventure, searching…searching.  Then…there we were: facing two yellow kayaks planted vertically in the ground, reaching up into the sky, with a sign in the middle telling us we had arrived.

A nice little man was working the entrance gate, and let us in to look around since they were soon to close down for the day.  I felt like we had entered an island hide-away…on the river!  Palm trees everywhere, along with tiki palapas style cabanas and picnic tables.  And it was all so secluded, you’d never know it was there…unless someone told you.  I was thankful to Nico, for bringing us to such a charming island escape as Banana Bend.

And even though we were only able to stay for a short time before dark was beginning to fall and we had to head back and try to catch the last ferry, we had already began to plan a day trip to our new island escape (or escape from the island).  Having recent bouts of island fever, I know Banana Bend is just the place I’ve been needing all along.

*Here’s to new adventures, inland…and beyond!*

**NOTE to Families**  Recommended Family Days – Saturday/Sunday Afternoons & Weekdays (off-season): After careful research, it seems that BB is quite the party place during summer months and on weekends.  We visited late on a Saturday during the off-season, and all was peaceful and quiet.  It’s best to do your homework before visiting, to know of which events are taking place on any particular day or weekend.  Visit Banana Bend on Facebook. 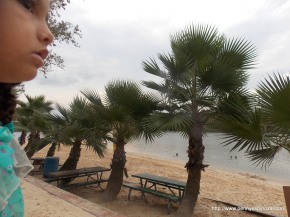 Travels In A VW Westfalia